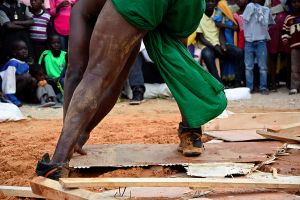 Stitched into Senegal’s social fabric, wrestling bares witness to a distinct form of modernity. The magic and beliefs surrounding wrestling still remain intact from the origins of the sport, with marabouts preparing different charms, potions and spells to bless the fighter. As the nation’s economy has plunged, laamb’s appeal has skyrocketed. As the sport entered the realm of corporate sponsorship, the traditional and spiritual nature of the sport has become imbued by the phenomena of materialisation, mondialisation and wild capitalism. Destilling wrestling’s underlying ties to global capitalism, social struggle and political symbolism, Baba-Ali eliminates the opponent and replaces him with objects taken from wrestler’s daily lives. Invigorated by the sound of the drums and rowdy crowd, the wrestlers thus battle it out against the struggles of their daily existence. Humanising issues are too often spoken of in terms of economy and politics.

How can art catalyze change?:
Younes Baba-Ali makes art that is unconventional, intelligent and critical, mostly in public space or places uncommon to art practice. He is a sharp observer and raises pertinent questions aimed at society, the institution and above all, his audience. As a free thinker he holds a mirror up to society and confronts it with its ingrained habits and dysfunctions. Baba-Ali’s work often assumes the form of the readymade, but underneath its facade of simplicity there is a complex exercise in balance at work. As an artist-alchemist he measures and mixes technology, objects, sound, video and photography with political, social and ecological issues. The resulting installations discreetly coerce the unsuspecting viewer into taking a stand. Baba-Ali shuns no controversy and often finds himself negotiating his art and its rationale with his environment. His works are context-specific and take their final form in dialogue with its spectators. This at times disruptive intervention art confronts the viewer in an ironical way with himself and his environment. Baba-Ali presents people dilemmas and taboos and challenges them to (re)act. In this way he makes them his accomplices in acts of artistic guerrilla that unite the establishment and the common man.