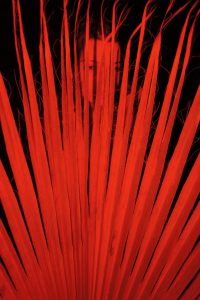 A year ago, when I got the invitation to work on a scientific problem in Israel, I knew almost nothing about the country. As I was very excited about the work, I didn't check much about the town where I was coming beforehand. I just boldly came to see. Here I found myself in a relatively small town called Ariel, located on the West Bank, considered by many an annexed Palestinian territory. The problem overwhelmed and disheartened me – the seemingly beautiful and peaceful town was surrounded by many levels of formidably-looking fences. I started to interview people around me and desperately bombarded Google with questions while thinking about leaving. After some months of research, the conflict appeared before me as it is – tough, messy and almost unsolvable. As I was thinking about it every day for some salvation, I started to take pictures of myself, the way I felt grounded here, and how anticipated other people might feel about it. Being a photographer, I saw it as my new project, the hardest project I ever had. I still don't know whether it can lead anywhere, but I plan to continue and try to exhibit the work around the country, or both countries, that painfully intersect and live in two different dimensions on the same ground – Israel, and Palestine.

How can art catalyze change?:
This project has basicaly resulted from my pain, and for me, it was a remedy itself. I believe that we all can catalyze change if we are open to ourselves and with each other. A few months ago, I saw the photo works of a Palestinian artist, Ruba Salameh, on the group exhibition “Tar and Milk” in Haifa, which impressed and further inspired me to do what I’m doing. To see the problems, we need to talk about them and to read them from as many perspectives as we can. The one work can never be a solution itself, but it’s a start. Let’s talk and let’s see.