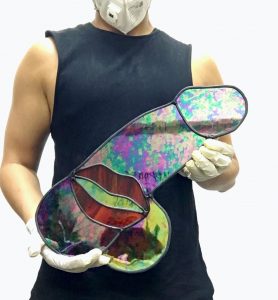 Gangsters attacked general citizens indifferently in Yuen Long subway station in Hong Kong on 21 July 2019 during the Anti-Extradition Law Amendment Bill Movement (ELAB). Dozens of people were injured and Hong Kong Police Force (HKPF) turned a blind eye. This violent incident shocked the whole society with a lot of Hongkongers‘s anger towards the incapability (and suspected cooperation with the gangsters) of the HKPF and also the violence of the gangsters. One web user in LIGHK, a multi-category forum website based in Hong Kong, miswrote a word in a comment that he would like to “kiss” (錫) and not “kick” (踢) their balls (“spring bag”(春袋) in Cantonese slang) and it becomes a famous term and being widespread around Hong Kong. People developed this idea further and used it in the movement such as making of slogan “stop charging or we kiss your spring pocket” (停止衝擊否則錫你春袋). Apart from the catchy phrase and sexual joke, we can never underestimate the value of humour, especially during a difficult time. Professor Philip Zimbardo, the author of The Lucifer Effect: Understanding How Good People Turn Evil who conducted the famous Stanford prison experiment, expressed the importance of humour that “ … the failure to use humour to defuse tension or even to bring some reality to an unreal situation…” makes all participants very tensed and stressed and “… humour breaks through the pretensions of person and place.” 5 colours were created and to represent 5 parties that caused great troubles to Hong Kong during the anti-ELAB movement: Blue colour represents a group of so-called “love Hong Kong” protestors who always wear blue t-shirts and conduct violent acts during their “Love Hong Kong“ activities such as teasing off the Lennon wall; Green colour represents the riot Hong Kong police who dressed in green uniforms; Black colour represents the HKPF that local people called them as “dead black cop”(the dirty cop) (死黑警) because of excessive usage of force and breaching of law and regulations such as not displaying their warranty number while they are executing their duties; Grey colour represents the Hong Kong government’s discouraged attitude in solving the conflicts and also the grey-coloured dress code that the Chief Executive Carrie Lam likes to wear; White colour represents the group of gangsters in Yuen Long as all of them were wearing white t-shirts on 21 July 2019 during the terror attack in the station. It is hoped that the usage of stained glass will transfer these devastating feelings into something humorous and also the characteristic of stained glass works as it encourages us to, literally, search for a brighter side so that we can appreciate this world more.

How can art catalyze change?:
To let more people know about how we fight for freedom and justice.