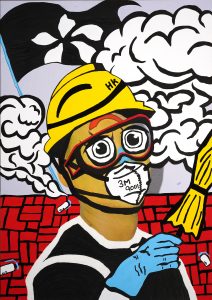 From June to first week of December, police had fired over 10000 canisters of tear gas at protesters in Hong Kong. Police not only fired tear gas at the area where protest carried out, but also to private and even residential area. As a Hong Konger living in London, to reveal my feeling towards the recent situation in Hong Kong. What happened in Hong Kong? Hong Kong's protests started in June against plans to allow extradition to mainland China. Critics feared this could undermine judicial independence and endanger dissidents. Until 1997, Hong Kong was ruled by Britain as a colony but then returned to China. Under the "one country, two systems" arrangement, it has some autonomy, and its people more rights. Protesters feared the bill would allow China to encroach on these rare freedoms. As the stand-off with the government stretched on, peaceful mass marches increasingly descended into violent clashes with police — and the movement quickly grew to include five major demands: – The complete withdrawal of the proposed extradition bill – The government to withdraw the use of the word “riot” in relation to protests – The unconditional release of arrested protesters and charges against them dropped – An independent inquiry into police behaviour – Implementation of genuine universal suffrage Apart from reading the news, I watched the live TV of the protest hold by different channel and from friends. What I feel that it is a different Hong Kong I used to know. Violent and indiscriminate arrest; Universities in Hong Kong turned into battleground and under siege; police undercover as protester to destroy public utilities. At the same time, government uses many tactics to defame protesters by labelling them as rioters at the very beginning. They have power to control most of the media channel and show what they want the audience to see. In MTR (subway), they play public announcement that service has to suspend or stop due to facilities are being destroyed. Government even hinder the press and police fired pepper spray at journalists. What’s more, government announced a ban on face masks at public gatherings. Seeing the above situation, is to record my feeling towards Hong Kong in 2019. The 3 pictures represent the following respectiviely: Protester; Chief Executive of Hong Kong- Carrie Lam; Hong Kong Police. As an makeup artist, I applied full makeup on the model as an irony to the anit-mask law. Then I look the picture of the model in camera and print it out. The final step is to use marker to draw on it. The protester wears the signature yellow helmet and mask surrounded by tear gas, which is also labeled as rioters by the government. Carrie Lam is at the scene of a press conference, the tape recorder on her head signifies her same wordings and attitude towards the events. Police is like a monster controlled by government and attack Hong Konger violently.

How can art catalyze change?:
Hong Kong Protest has the support from many countries and also influences the world. The ‘be water’ kind of protest style has been applied in London protest. Many places in the world are also having protest against government and different issue such as Catalonia, Egypt, Chile, Lebanon etc. I hope my art work can raise the questions to the world of how we can response to a powerful or even totalitarian state.