The Ecocyde of Lura – How Albania lost the centurial National Park of Lura to human greed? 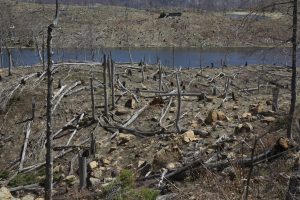 In less than 25 years, significant, uncontrolled, illicit deforestation activity has taken place in most forests across Albania at a pace of 2-4 times higher than the natural forestation pace. Such illicitly obtained wood has served to furnish most furniture producers, and international markets with rare old beech tree beams, and other similarly precious woods. As a result, Albania is left with less than 1% of its old beech forests compared to the 7% ten years ago. Furthermore, it ranks among the least forested countries in Europe, and the Western Balkan region, with only 27% of its territory comprising of forests. Given the pressure by environmentalists, both local and international, the Government of Albania declared a “Moratorium on Forests” in 2016, severely “restricting” any cutting/deforestation activity. Fresh logs and piles of centurial beech cut into firewood, are part of the current reality in Lura as we speak. In an attempt to document and expose the scope and focus of this forest ecocide.

How can art catalyze change?:
By documenting and exposing the scope and cost of forest ecocide in Albania through evidence-based photography, in an attempt to call for action and urge local Albanian people and policy-makers.