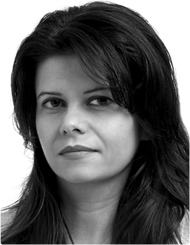 Vanessa Ramos-Velasquez is a media artist and trans-disciplinary researcher from Brazil and the United States, where she was a Fulbright scholar at the University of Kansas/USA. Her artistic practice delves into meta-narratives, intersecting structuralist image-making processes, design, society and technology. She extends generative video art as performance into interactive performative installations, where the public is invited to participate, in order to co-create an experience.

An embodiment of this practice, the work titled ‘Coded Narratives’, with guest musician A Guy Called Gerald, premiered at Berlin’s leading media arts festival, transmediale, in 2013, for a large audience at the main auditorium of Haus der Kulturen der Welt. In 2011 she received the Vilém Flusser Theory Award Distinction, also at transmediale, with the work “Digital Anthropophagy and the Anthropophagic Re-Manifesto for the Digital Age”, which since then, has been presented globally. The award inspired her to further research in the field of phenomenology in digital culture at the Vilém Flusser Archive at the University of the Arts – Berlin (UdK), where she received her MA in New Media in an interdisciplinary collaboration with Humboldt University at the Institute for Cultural History and Theory.

Balancing a long-term career in the creative industry, she continues engaging in the academic field. Her doctoral work combines themes, such as the Anthropocene/Capitalocene, the artificial divide between nature & culture, trans-formative environmental technologies, and Amerindian Perspectivism.